Most Germans Don’t Buy Homes; They Prefer To Rent. Why? 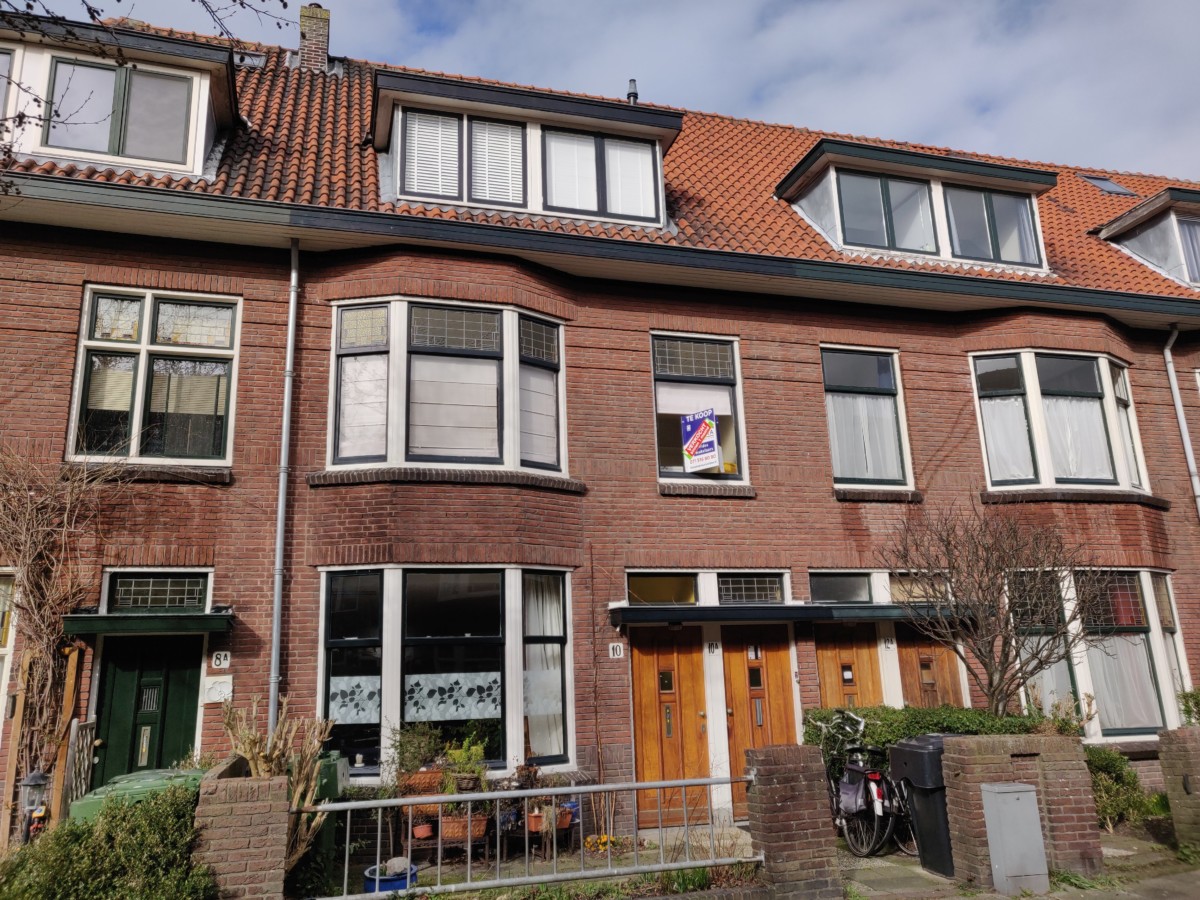 Most Germans don’t worry about owning their home. They just don’t care and that is a fact.

The country’s homeownership rate ranks among the lowest in the developed world, and nearly dead last in Europe, though the Swiss rent even more. Here are comparative data from 2004, the last time the OECD updated its numbers. (Fresh comparisons are tough to find, as some countries only publish homeownership rates every few years or so.) 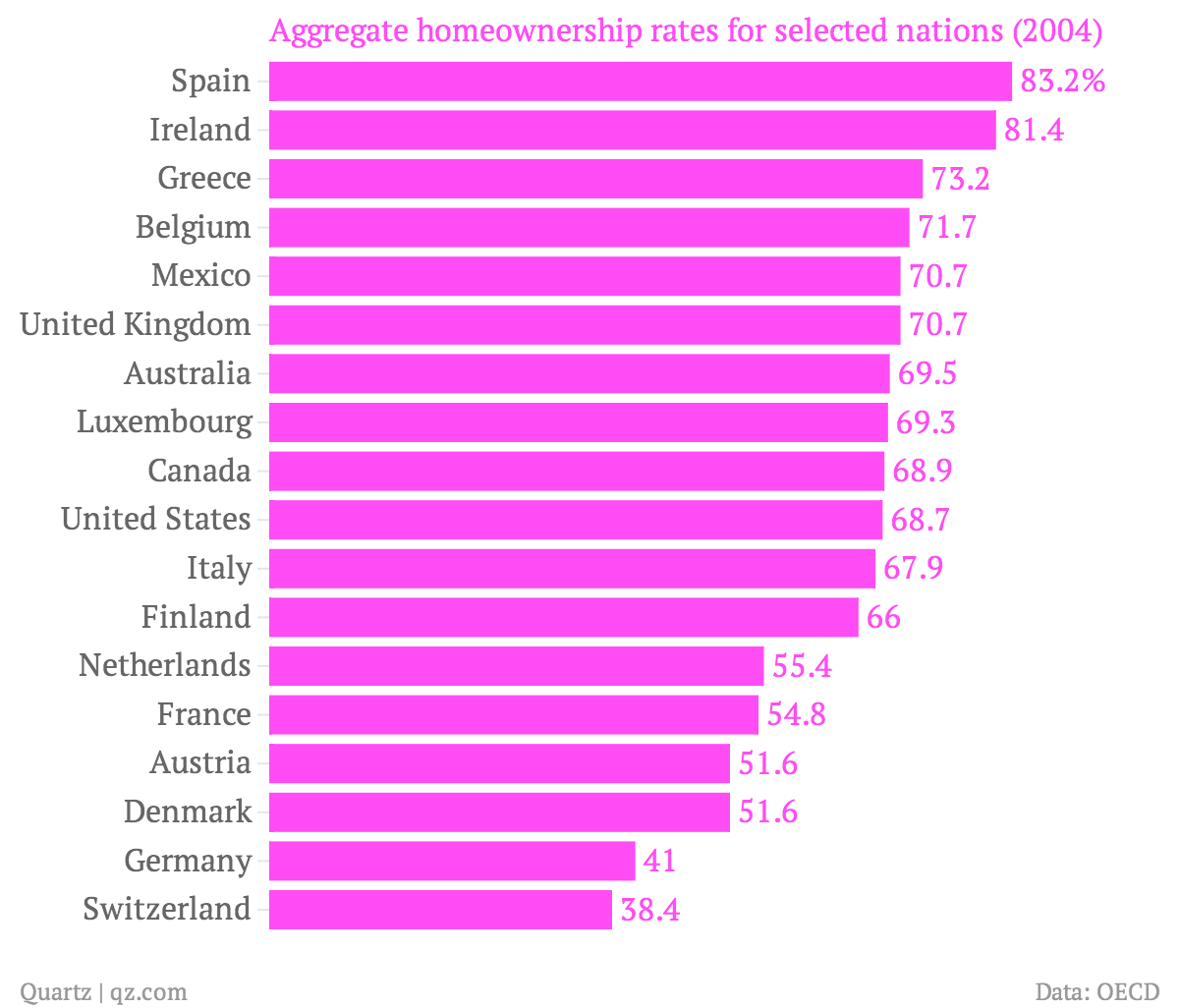 And though those data are old, we know Germany’s homeownership rate remains quite low. It was 43% in 2013.

This may seem strange. Isn’t home ownership a crucial cog to any healthy economy? Well, as Germany shows—and Gershwin wrote—it ain’t necessarily so.

In Spain, around 80% of people live in owner-occupied housing. (Yay!) But unemployment is nearly 27%, thanks to the burst of a giant housing bubble. (Ooof.)

Of course, none of this actually explains why Germans tend to rent so much. Turns out, Germany’s rental-heavy real-estate market goes all the way back to a bit of extremely unpleasant business in the late 1930s and 1940s.

By the time of Germany’s unconditional surrender in May 1945, 20% of Germany’s housing stock was rubble. Some 2.25 million homes were gone. Another 2 million were damaged. A 1946 census showed an additional 5.5 million housing units were needed in what would ultimately become West Germany.

Germany’s housing wasn’t the only thing in tatters. The economy was a heap. Financing was nil and the currency was virtually worthless. (People bartered.) If Germans were going to have places to live, some sort of government program was the only way to build them.

And don’t forget, the political situation in post-war Germany was still quite tense. Leaders worried about a re-radicalization of the populace, perhaps even a comeback for fascism. Communism loomed as an even larger threat, with so much unemployment.

West Germany’s first housing minister—a former Wehrmacht man by the name of Eberhard Wildermuth—once noted that ”the number of communist voters in European countries stands in inverse proportion to the number of housing units per thousand inhabitants.”

A housing program would simultaneously put people back to work and reduce the stress of the housing crunch. Because of such political worries—as well as genuine, widespread need—West Germany designed its housing policy to benefit as broad a chunk of the population as possible.

The rise of renting

Soon after West Germany was established in 1949, the government pushed through its first housing law. The law was designed to boost construction of houses which, “in terms of their fittings, size and rent are intended and suitable for the broad population.”

It worked. Home-building boomed, thanks to a combination of direct subsidies and generous tax exemptions available to public, non-profit and private entities. West Germany chopped its housing shortage in half by 1956. By 1962, the shortage was about 658,000. The vast majority of new housing units were rentals. Why? Because there was little demand from potential buyers. The German mortgage market was incredibly weak and banks required borrowers to plunk down large down payments. Few Germans had enough money.

It’s worth noting that Germany wasn’t the only country with a housing crisis after World War II. Britain had similar issues. And its government also undertook large-scale spending to promote housing. Yet the British didn’t remain renters. The UK homeownership rate is around 66%, much higher than Germany’s.

Why? The answer seems to be that Germans kept renting because, in Germany, rental housing is kind of nice.

Economists think German housing policy struck a much better balance between government involvement and private investment than in many other countries. For instance, in the UK, when the government gave housing subsidies to encourage the building of homes after the war, only public-sector entities, local governments, and non-profit developers were eligible for them. That effectively squeezed the private sector out of the rental market. In Germany, “the role of public policy was to follow a third way that involved striking a sensitive balance between ‘letting the market rip’ in an uncontrolled manner and strangling it off by heavy-handed intervention,” wrote economist Jim Kemeny, of the German approach to housing policy.

Britain also imposed stringent rent and construction cost caps on developers of public housing. Under those constraints, housing quality suffered. Over time, the difference between publicly and privately financed construction became so glaring that rental housing—which was largely publicly financed—acquired a stigma. In other words, it became housing for poor people.

Germany also loosened regulation of rental caps sooner than many other countries, according to economist Michael Voightländer, who has written extensively about Germany’s housing market. By contrast in the UK, harsher regulation on rented housing stretched well into the 1980s, pushing landlords to cut back on maintenance and driving the quality of housing down still further. 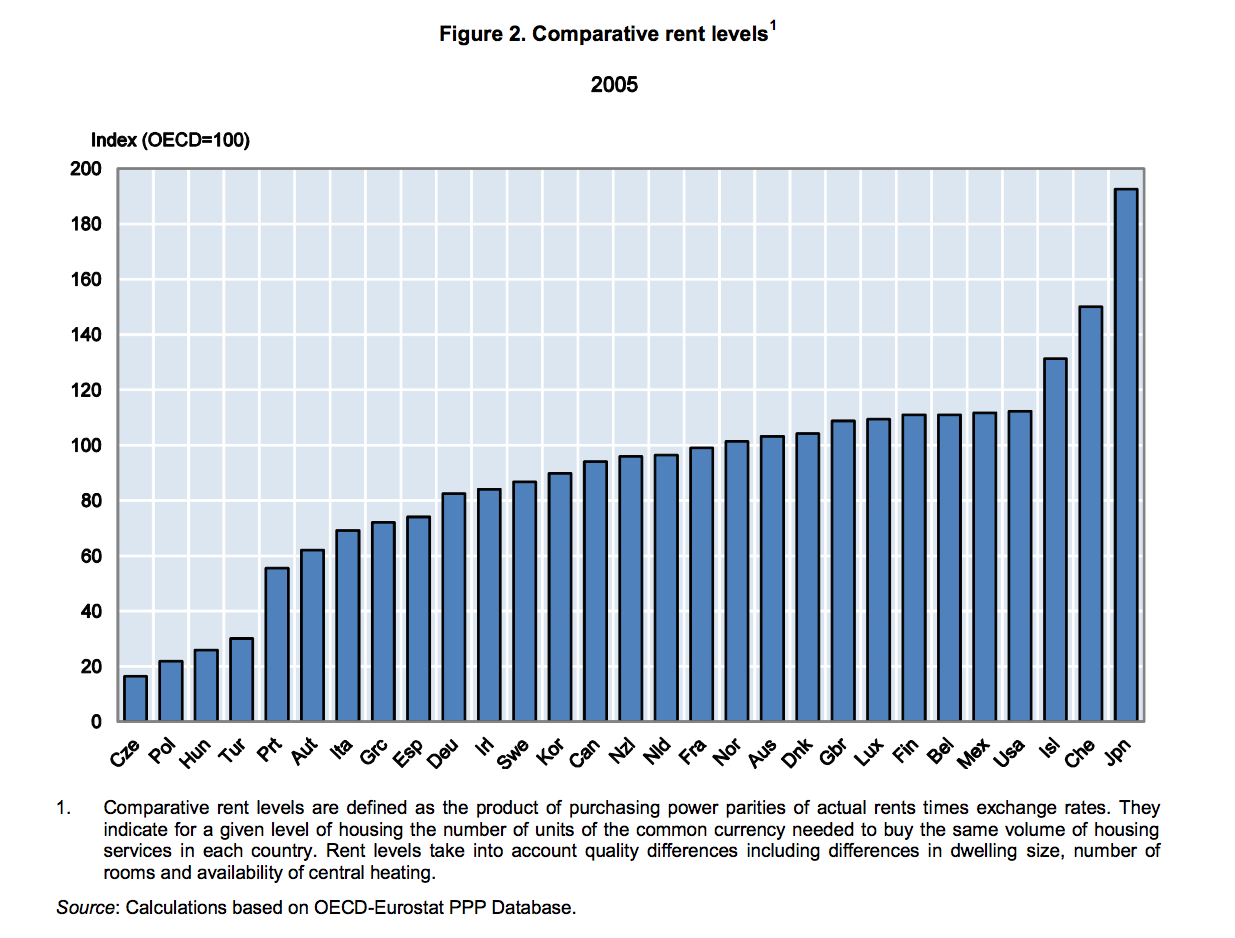 Of course, all that policy-design detail is interesting. But there might be a simpler explanation for the popularity of renting in Germany. For one thing, it’s relatively cheap. (Germany is listed as “Deu” above.)

Why is renting cheap in Germany? Well, even though the country’s policies might have been slightly more balanced than in other countries, its rental market is still robustly regulated, and the regulations are quite favorable to renters. (Given the strong political constituency renters represent in Germany, this shouldn’t be too surprising.) For example, German law allows state governments to cap rent increases at no more than 15% over a three-year period.

There’s another pretty simple reason Germans are less likely to own houses. The government doesn’t encourage it. Unlike high-homeownership countries like Spain, Ireland and the US, Germany doesn’t let homeowners deduct mortgage-interest payments from their taxes. (There’s more on the structure of European tax systems here.) Without that deduction, the benefits of owning and renting are more evenly balanced. “Both homeowners and landlords in Germany are barely subsidized,” wrote Voightländer in a paper on low homeownership rates in Germany.

Those regulations, a solid supply of rental housing, and the fact that German property prices historically rise very slowly —that’s a whole other story—mean German rents don’t rise very fast. And because one of the main reasons to buy a home is to hedge against rising rents, the tendency of German rents to rise slowly results in fewer homebuyers and a lower homeownership rate.

A number of other elements contribute too, but it’s tough to disentangle what is cause and what is effect. For example, German banks are quite risk-averse, making mortgages harder and more expensive to get. Others argue that the supply of rental housing might be higher in Germany because of its decentralized, regional approach to planning. (The UK is much more centralized.)

Is Germany just better at housing?

Not necessarily. It’s not as if Germans spend a lot less of their pay on housing. The data below show Germans actually pay more for housing—as a percentage of disposable income—than housing-crazed countries like the US, Spain and Ireland.

But given the economic spasms suffered in house-crazy economies such as the United States, Spain and Ireland in recent years, the German approach to housing looks pretty good right now—even if, before the crash, the low homeownership rate was seen as an albatross around Germany’s economic neck.

And German people clearly like how their system of housing works. According to the OECD, more than 93% of German respondents tell pollsters they’re satisfied with their current housing situation. That’s one of the highest rates of any nation the rich-country think tank surveyed. Then again, the Irish and the Spanish—where homeownership is much more widely spread—seem just as happy.

Owning A Home Vs Renting: What Is The Difference? 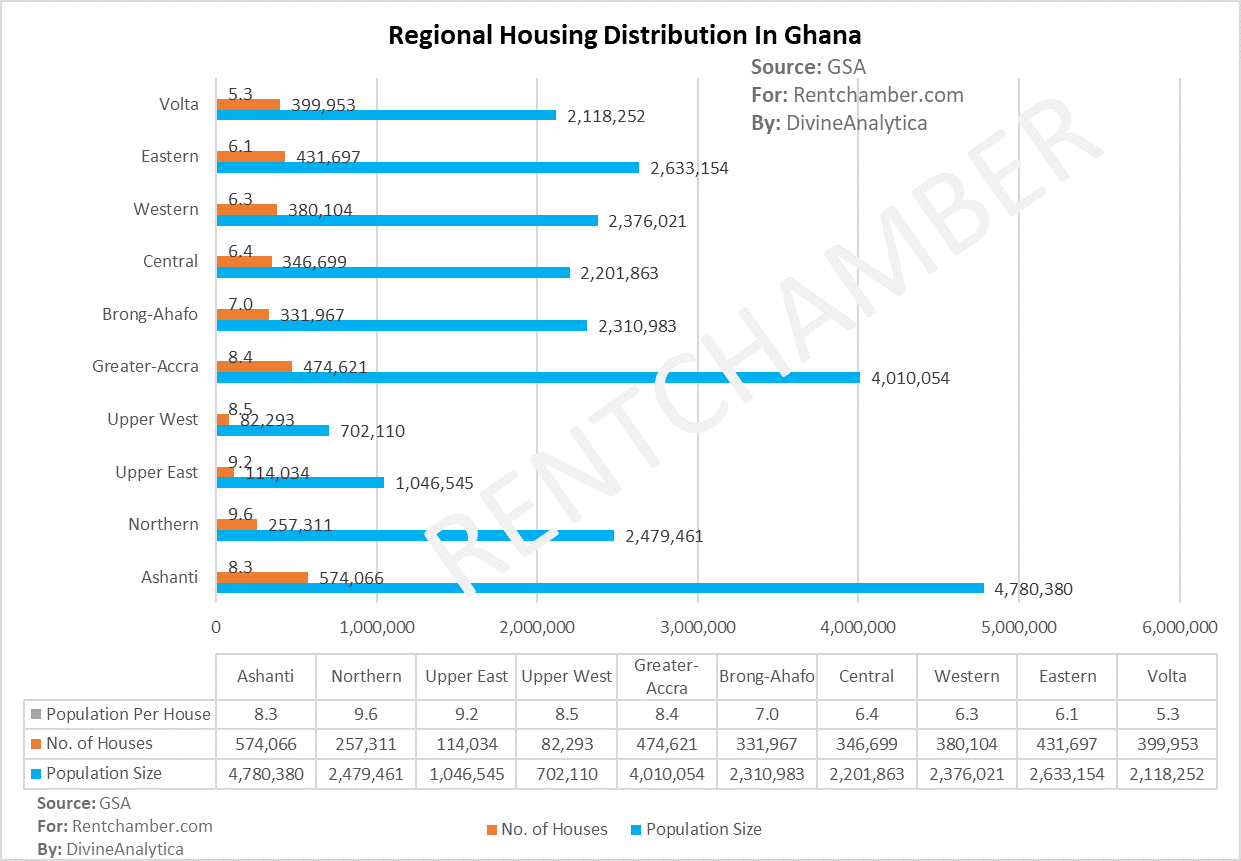 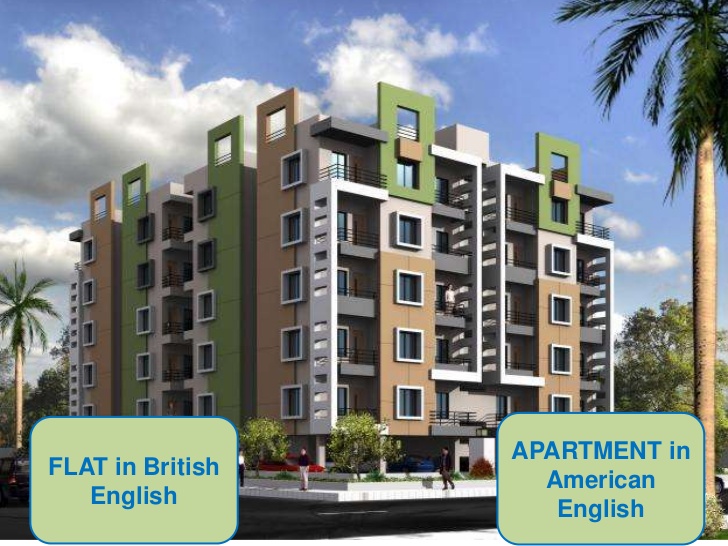